More than 60 percent of the nation’s governors now oppose the Obama administration’s plans to relocate thousands of Syrian refugees into their states.

There are currently 31 governors of states located across the country that disagree with allowing these refugees. All but one state is headed by a Republican governor. 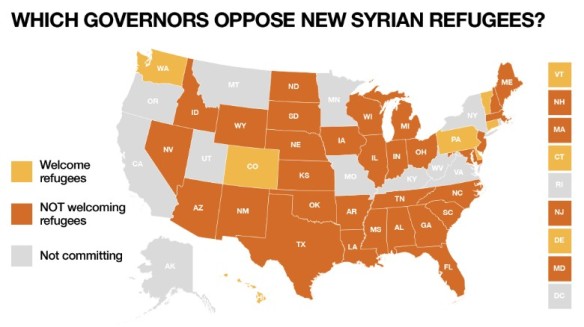 The fear of having Syrian refugees relocated in America comes after the terrorists attacks in Paris. Authorities released information that one of the suspects entered Europe using a false name during a recent wave of Syrian refugees. Today, Honduran authorities arrested five Syrians intending to make it to the United States with stolen Greek passports.

These governors are opposing the plan in hopes of protecting the safety of each state’s residents while also asking for a stronger screening process of refugees.

I find myself at a crossroads when it comes to allowing refugees into our country. My heart tells me that I should be accepting towards these people that are fleeing from violence, but at the same time my head tells me that we should be cautious about this process too.

Republican Nathan Deal, Georgia’s Governor, also said he will not accept Syrian refugees until the federal government and Congress conducts a thorough review of current screening procedures and background checks.

President Barrack Obama wasn’t happy with the Governors that oppose his plan though. “Apparently they’re scared of widows and orphans coming into the United States of America as part of our tradition as compassion,” he said. Parts of the video can be seen below.

According to the Office of the United Nations High Commissioner for Refugees (UNHCR), there are more than 4.2 million Syrian refugees. Of these refugees, 49.7% are males and 23.4% of those males are 18 or older. That is far from a bunch of “widows and orphans.”

Unfortunately the actions of a few have hurt the entire group in this situation. All Syrians are not bad —All Muslims do not agree with these terrorists.

I want the United States to come across as a compassionate group of people. I want to allow them into our beautiful country and experience all we have to offer, but I want to know that we are doing all we can to keep those out that have no right being here.

Governor Bentley said it best, “One mistake on our part could lead to tragedy.”