Chick-Fil-A has introduced a new family challenge for customers. If you will agree to place your phones in a “Cell Phone Coop” while you eat, then every person that participates will receive a free ice cream cone.

In my opinion, Chick-Fil-A is the leader in customer service as they continue to provide an excellent customer experience. The restaurant is almost guaranteed to be crowded at lunchtime, but they move through a drive-thru line with haste, especially those with double drive-thru lines. The employees are some of the friendliest employees in fast-food, and they set the standard for how fast food workers should treat the customer. The restaurant is always clean (I try stopping here for bathroom breaks on trips), orders are usually accurate, the food is delicious, and they promote family nights.

I love that they are trying to help people enjoy their dinner with each other instead of staring into a phone. There has been numerous times that we have been out to eat and see other people spending more time on their phones than with each other. Couples are staring at their phones instead of staring at their partner, parents are ignoring their kids because they are checking their phones, and kids, yes young kids, are in a trance as they play with their tablets. What happened to kids wanting to spend time in the play area?? 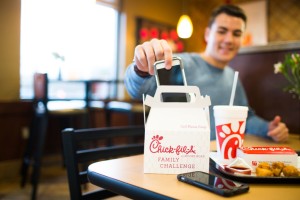 Jenny Radesky, a developmental pediatrician at the Boston Medical Center, studied parent-child interaction at fast-food restaurant. Her study found that more than 70% of adults used their cell phone during the meal.

Radesky said face-to-face interactions are the primary way children learn. “They learn by watching us how to have a conversation, how to read other people’s facial expressions. And if that’s not happening, children are missing out on important development milestones,” she said.

Maybe the noise is a factor for you — videos and games being played loudly, the girl snap-chatting every moment of her dinner, the guy talking on the phone so loud that everyone in the restaurant can hear, and those numerous selfies being taken.

According to a study conducted by Baylor University, cell phones can damage relationships and lead to depression. The study was used to learn about the effects of “Phubbing”or partner phone snubbing, which is described in the study as people that are distracted by their cell phones while in the company of their partner.

The results showed that almost 47% of respondents reported being pphubbed by their partner, and 22% of those people said it caused conflict in their relationship. Just under 40% reported feeling depressed some of the time.

Even though I think the family challenge is a wonderful idea, it still saddens me that we have reached this point. Technology is a great thing, and has helped us positively move forward in so many ways, but there are always a few drawbacks. When I was young it wasn’t “cool” to meet someone online, now everyone is just trying to swipe right. I’m not saying it is bad that we spend time on our phones, but I hope we don’t lose our ability to connect with others in person.

Put down the phone, and enjoy dinner with your family. It could potentially lead to a better relationship and a happier life.

The challenge is not currently being offered at all locations, but can be found at more than 150 restaurants.